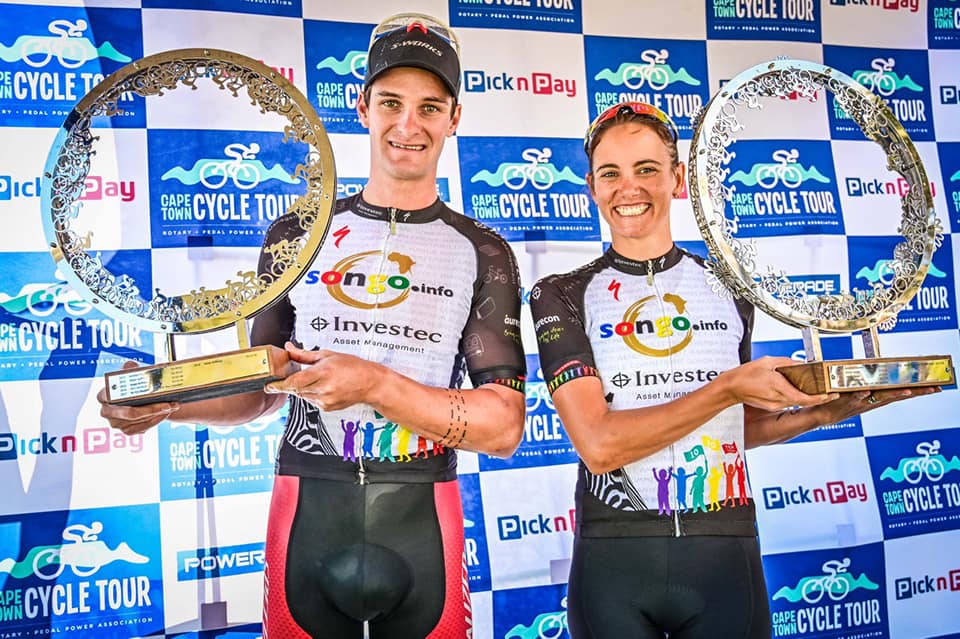 New Zealander Sam Gaze completed the double for Investec-Songo-Specialized by timing his sprint in the men’s race to perfection. Gaze denied Jason Oosthuizen (TEG Pro Racing) and Clint Hendricks (Pro Touch Continental) on the line, in a time of 02:39:42.

After a successful experiment in 2018, the elite and u23 women once again had their own start in Fish Hoek and Willeit crossed the line in a time of 02:16:11, after their 78-kilometre race.

“I absolutely cannot believe it,” an elated Willeit commented shortly after the finish. “It’s just such a special victory for me today, in front of my husband and kids,” she said.

A strong southeasterly wind made for highly tactical racing from early on and the mountain bikers took the fight to the more favoured road teams of Sandton City/Cycle Nation and Demacon MaxWax Racing.

“Dormakaba and Summit Fin went hard right from the start,” Willeit said, explaining how a group of around 30, made up of a mix of mountain bikers and the main road teams, managed to get away at Smitswinkel.

Mountain biker Tiffany Keep attacked on Small Chappies and, along with Candice Lill (Summit Fin) – who won the Cape Town Cycle Tour MTB Challenge the previous weekend, pushed the pace. By the top of the main Chapman’s Peak climb, the group had been reduced to 10.

The lead bunch was again split in half on the infamous Suikerbossie climb when Joanna van der Winkel went out, dragging a handful of riders with her.

That group could not take it to the line, however, as cat-and-mouse tactics came into play in the last 10 kilometres, seeing the pace slow.

In the last two kilometres, the storming chase group – featuring defending champion Kim Le Court, was able to reattach. Willeit managed to find a clean line however and fend off the charge of Le Court and co, to take the win.

“Clint is an incredibly fast sprinter and there were a few other fast boys in there, so to be able to pull it off was really good,” commented New Zealand’s Sam Gaze (Investec-Songo-Specialized) after beating Jason Oosthuizen (TEG Pro Racing) and Clint Hendricks (Pro Touch Continental) to take the title of the world’s largest timed cycling race.

Gaze – who finished runner up in 2018 – was part of a group of 10 riders who got away after Simon’s Town. He called it an “honest race”, thanks to the prevailing Cape Doctor (southeasterly wind) and the depth of the racing field.

“The Dimension Data boys did the work out of Simon’s Town and only around 10 riders could hang on with them,” he said, explaining how Smitswinkel was once again a decisive climb in the race.

Gaze and Dimension Data’s Stefan de Bod attempted to make a break from the group – which included the likes of 2018 defending champion Nolan Hoffman (Team Enza), Namibian journeyman pro Dan Craven, Dylan Girdlestone (OfficeGuru), Byron Munton (Alpha Bodyworks Giant), as well as Jayde Julius and Clint Hendricks – but they were unable to get away.

Despite a valiant chase from the main peloton, the group stayed ahead. There were various surges up front, which saw a few riders dropping off the back up Chapman’s Peak and Suikerbossie, most notable of these, Nolan Hoffman.

As with the women, the men watched each other closely through the last 20, with no-one wanting to go too early or too hard. It stayed together and the bunch sprint was inevitable.

Gaze timed his attack to perfection to take the win on the line. “When I had that right-hander after the roundabout into the final few hundred metres I had a feel of the wind and had made up my mind that I was going to come from behind. Luckily it worked out perfectly.”

Gaze said he was proud to do the double for the songo.info charity.

“It feels incredible to win this with Songo on my back,” he said. “The guys have done so much good work over the past few years and I’m really proud to represent them. I’m looking forward to starting the Absa Cape Epic with Songo and hanging on to the ‘Kulhavy Express’ train,” he said.

You can watch the race replay here https://www.youtube.com/watch?v=LfC9T7EmDm0.