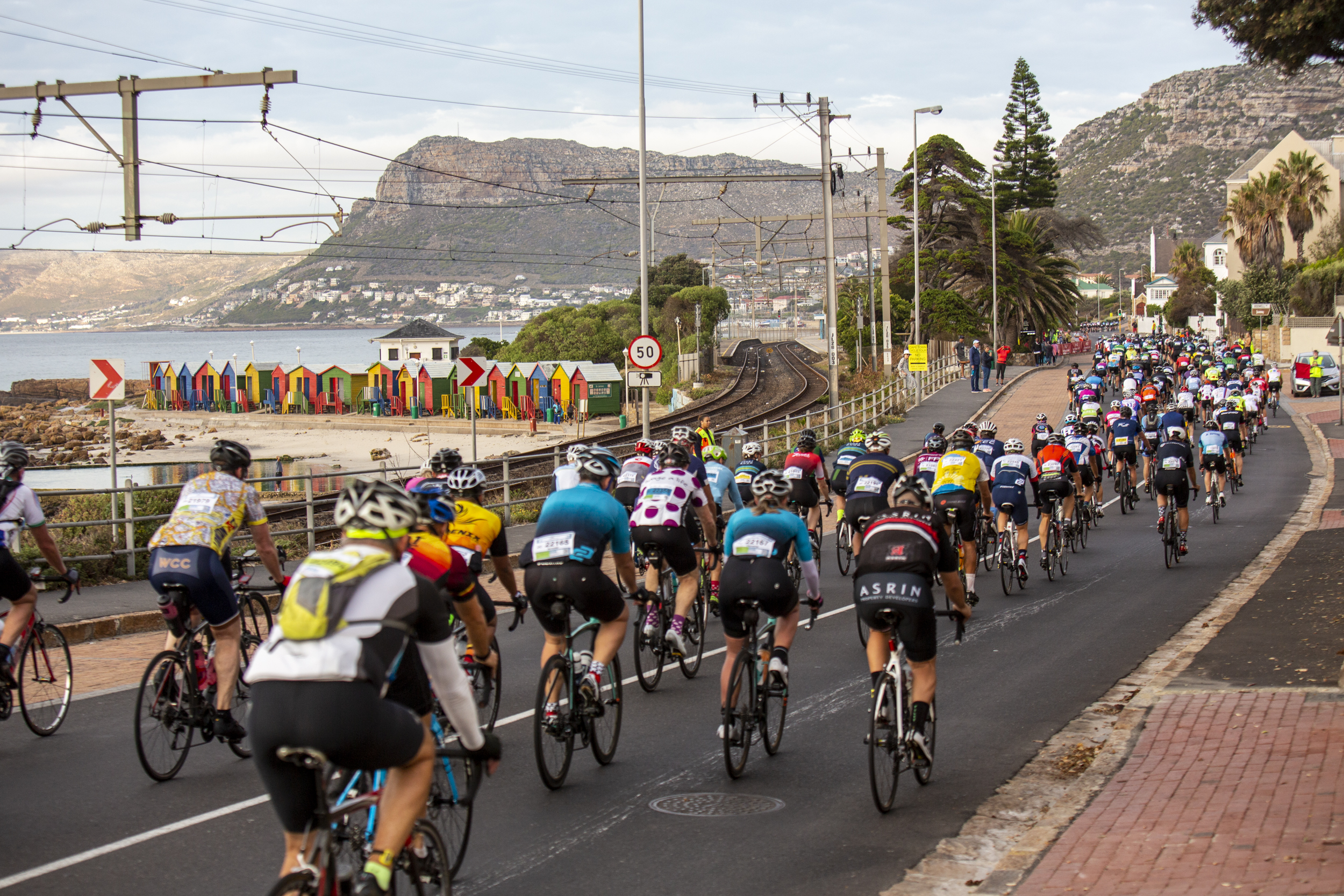 End of the Blue Route – Simonstown

At the end of the Blue Route, the 109km riders wave goodbye to the 42km riders (metaphorically; the short and long routes don’t run concurrently on the day) and head down to the Main Road, and to Muizenberg. Here beginneth the sea-side scenery, after 20km of non-stop heritage.

Not that the heritage and history stop here – Muizenberg was first settled by European immigrants in the mid 1700s, and in 1795 was host to the Battle of Muizenberg, a three-month-long conflict in which the British finally beat the Dutch for control of the narrow route from Simonstown to the rest of the Cape. It remained a military outpost, named after commander Wynand Willem Muijs in the days before the Brits took over, but in the late 1800s the long beach and never-ending breakers took the fancy of the Rand Lords and the rest of the rich and famous, and developed as a wealthy holiday outpost: many of the glorious older homes you will pass belonged to the really big names in the South African gold rush.

As you speed out of Muizenberg, the buzz of St James and Kalk Bay will hit with colour and noise from the always-wonderful local support. The former offers a series of superb beaches – sheltered in the South Easter – and rock pools, the latter is a working fishing village, established in 1913. Both are worth a day visit away from the Cycle Tour, with an eclectic collection of bric-a-brac, fashion and second-hand shops to keep every browser happy, before you drift further south and historic Simonstown.

But, first: Fish Hoek and Glencairn, both of which you will sail through in spite of potential, and regular head winds. Fish Hoek first made the news in 1725, with the arrival of a strange ship, flying no flag, anchored only a short way out in the Bay. She was the ‘Great Alexander’, of 26 guns, her crew of 60 men commanded by Pieter Dun, who said she was bound for the West Indies. A pirate ship, stopping in for supplies, to great conservation from Simonstown to the Castle, and even as far as Stellenbosch. After a few days of losing men to desertion, but being prevented from coming ashore for new crew or supplies, Dun high-tailed it out of the bay, never to be seen again.

Exciting times, then, in the early days of the seafaring town of Simonstown, which was established as a naval outpost by the Dutch in around 1650, offering the greatest safety from winter storms but a good day-and-a-half’s ride from the castle on Cape Town. Named after Simon van der Stel, it still functions as such, housing the South African Navy, but is also a vibrant holiday town, with quiet beaches and one of the last colonies of African penguins at Boulders beach, well worth a visit to watch these whimsical creatures do their thing. From a Cycle Tour perspective, Simonstown’s Jubilee Square hosts the vibiest water point of the entire route, a necessity as the next section takes you towards the barren, hilly beauty of Cape Point.

The 42km route skips all these battles and tales of piracy. By now, you have turned back on yourself and have discovered Wynberg hill is a bit of a beast on the way back, too, but with the reward of spectacular Constantia Vineyard views before a helter-skelter descent to Newlands, where you pass the heroes of the 2015 Cycle Tour: the Newlands Volunteer Wildfire Services base, where many of the men and women who faced much of the Peninsula from being destroyed by that year’s wild fires work from. They often line the road to honour your efforts on the bike; don’t forget to stop and do the same, if you can. They are true heroes.