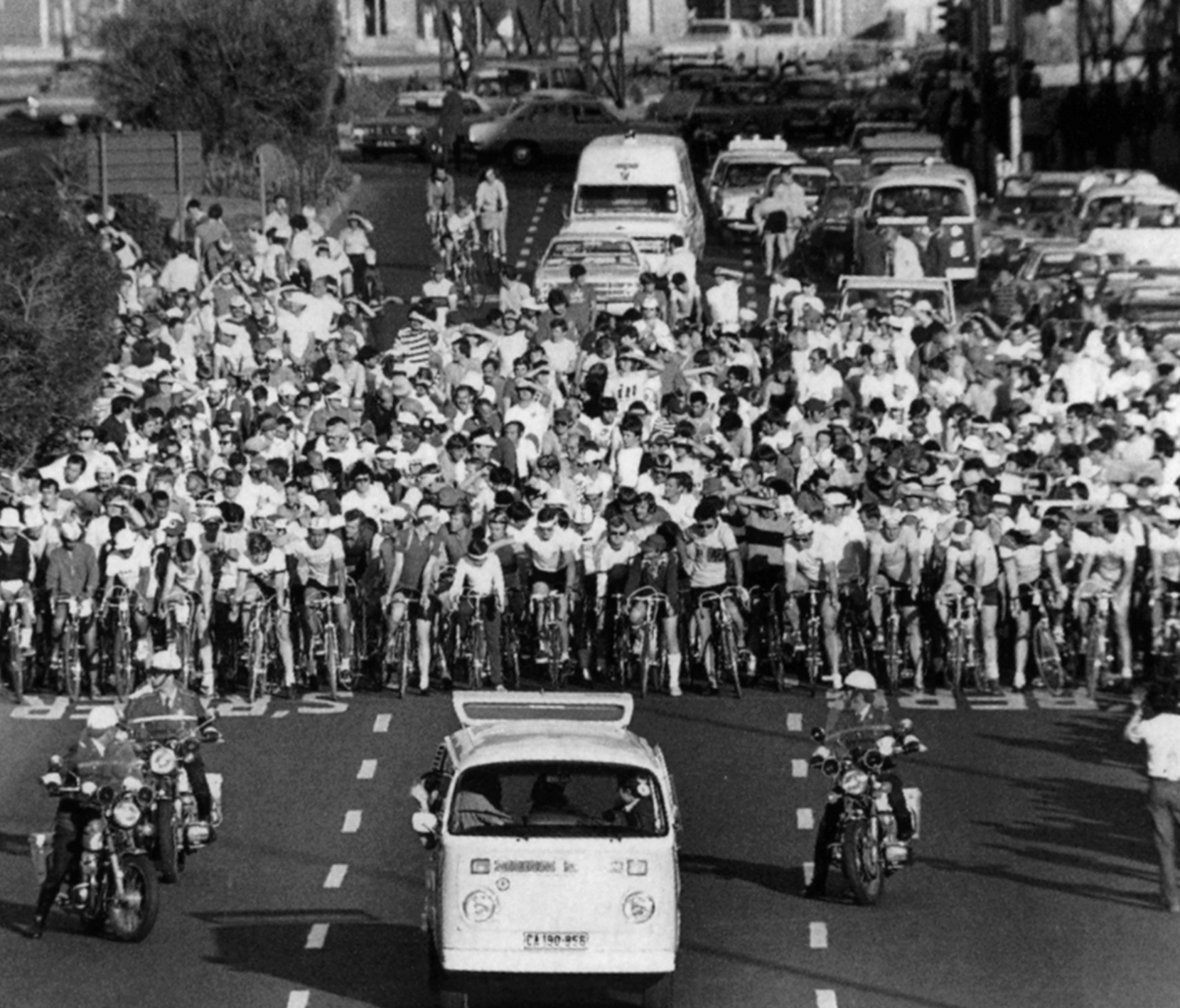 The inaugural ride started in balmy October sunshine, which soon degenerated into an early taste of the Cape summer, and a howling southeaster that played havoc with the small field. Without the big bunches we have become accustomed to, there was no shelter, and it was a long day in the saddle for all.

For the late Don Spence – one of the legends of WP cycling – it was marginally tougher, as he left a cycling shoe at home and was forced to ride with one cleated shoe and one takkie. Not as much of a handicap as it would be today, as his toe clips and straps would have held it firm, but it did mean he could only manage 9th overall, in 3:16, and 4th non-registered rider. Spence did remember a fellow rider he knew who worked at The Argus making small talk in the early stages, asking: ‘Do you think this thing will take off?’ Honest to a fault, he couldn’t remember thinking it would …

Further down the field, 14-year-old Sean Joffe (who had been dropped off by his dad, in the dark, at the Castle – times have changed) had decided to stop and wait on the stoep of the Noordhoek Café to ask for directions: he was lost. ‘Within a few minutes, along came a woman rider and pointed out where Chapman’s Peak was. From then on I was okay. To this day, I still debate with my father the merits of dropping a 14-year-old off at the station in the dark!’

There was a rudimentary water station at the entrance to Cape Point, where Peter Breytenbach remembers his first, life-altering taste of Game. ‘A drink I have used for race hydration ever since. The only spectators I remember were at the top of Suikerbossie, shouting “Go! Go! You are 11th”,’ setting the precedent for white lies and spectators that would buoy spirits for years to come, as Peter finished 53rd.

Cape Town lawyer Lawrence Whittaker reached the start line of the first Cycle Tour in the shape of his life. In the early days you could find some parking near the start, ten minutes before, whip the bike off and roll away. ‘I nearly didn’t even start, though. One of my pre-race rituals is to check that my quick-release skewers are tight, and as I did so, the rear one snapped. On the start line. Peter Haupt, from Kriel and Binneman, was standing next to me. His kombi was parked across the road – it was different in those days – so he ran across and got me a new one from his toolbox.’ And so, after a semi-relaxed build-up, the field rolled away from the Castle at 07:00, in sunny and windless conditions.

The racing group left 30 minutes after the ‘funriders’, and their 70-strong number soon caught the first stragglers before the top of Eastern Boulevard. The pace was, well, tactical – as borne out by the pedestrian non-sub-3 winning time. Lawrence made an effort on Wynberg Hill: ‘I rode it quite hard – I was always a good climber, but on that day I was so strong. Anyway, nobody could really follow me. I looked back and they were all gasping like fish, so I knew there was only really Wimpie to watch out for.’ When the wind began to pick up in the deep south of the Peninsula, it was Springbok strongman Wimpie van der Merwe who put the hammer down. Only Whittaker could follow, and the pair dropped the rest on Chapman’s Peak, riding mano a mano into the history books.

Lawrence attacked on Suikerbossie, but his 20-year-old rival clung on for dear life. On paper, Van der Merwe should have won the sprint comfortably, but Whittaker had beaten him before and would have none of it – and took the victory by half a bike length, on the Camps Bay beachfront.

Both riders would be regulars at the front of affairs in future Cycle Tours, before Whittaker would shift focus onto family, career and the administrative roles in which he changed the face of cycling in South Africa, while Van der Merwe would go on to be one of the legends of cycling in South Africa, including blitzing the any-course record with his 2:16 ride in 1993.

The women’s field was not huge in 1978. Let’s face it: the field itself, although impressive for its time, was not huge, either. Once the core group of 50–60 hotshots had sped off down Hospital Bend, there was lots of open space between the remaining 400-odd competitors, over 104km. By today’s standards, the times recorded in the first edition of the event could be seen as pretty poor, but if you look at an increasingly blustery day, as the southeaster picked up around lunch time, and the lack of big bunches to shelter in, the times are actually not so shabby.

In this light, let’s judge the inaugural winning efforts only on time. Just 59 riders managed to finish in under four hours, and 27-year-old Janice Theis finished 175th overall, with only half the field breaking the five-hour barrier. Only 15 women would finish the inaugural Argus Tour, including Julia Whittaker, who finished 7th to almost eclipse hubby Lawrence, but not quite. Theis would come back in 1979 and ride more than an hour quicker to retain her title.