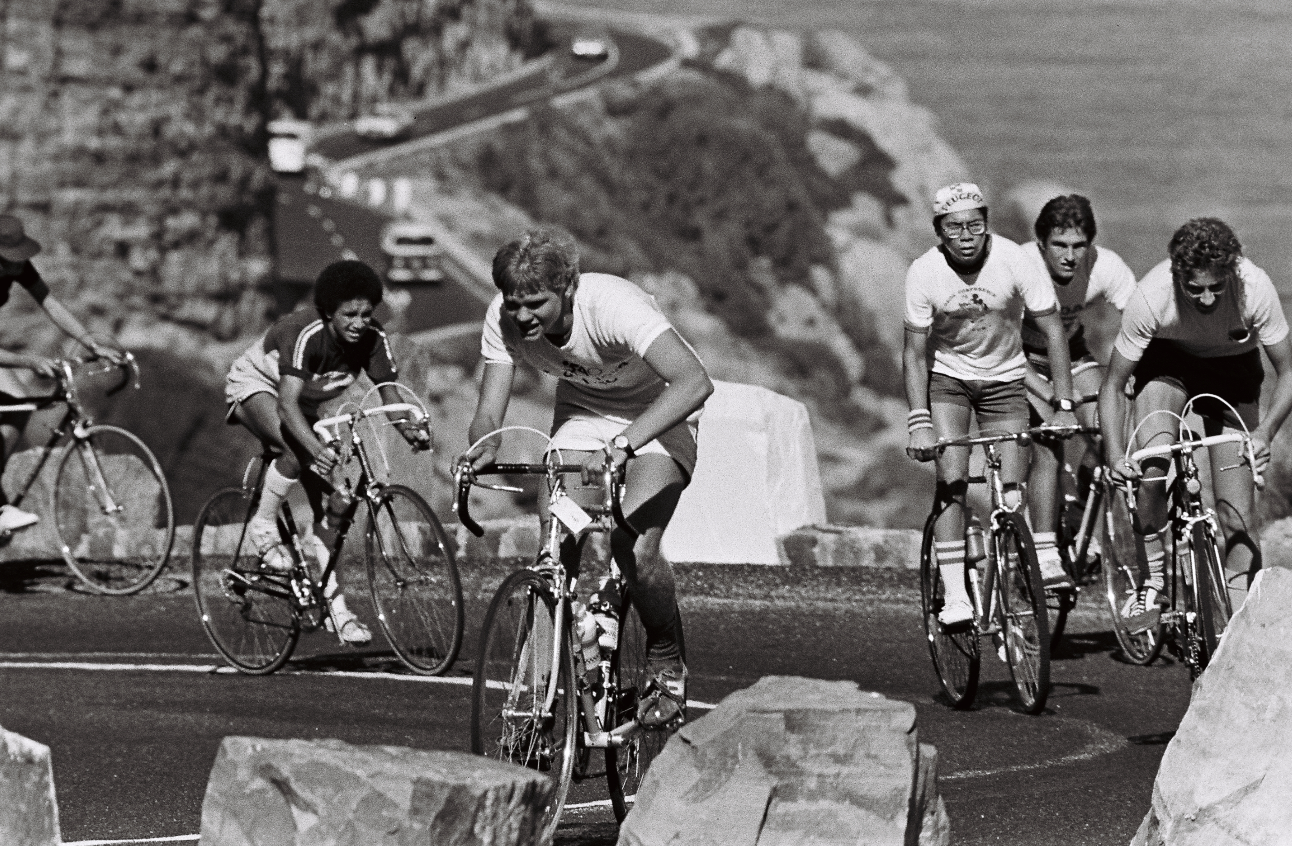 The 1980 Tour finally broke through the thousand-entries barrier, having fallen an agonising one rider short in year two. With nearly 1 400 riders lining up to start, the organisation of the Tour was becoming a massive operation – this was the biggest bike race in the country, by a long stretch, and was rivalling the ten-year-old Two Oceans Marathon, which had ‘only’ attracted 1 229 entries the previous year. Add the speed of the participants and the extra distance to the mix, and the logistics of the Cycle Tour required a far greater number of volunteers on the day, and a driven organising committee.

The growth of the event had been noticed in non-cycling circles, too, as CAPTOUR, the body tasked to market Cape Town and the Western Cape as a holiday destination, saw the potential of the event and persuaded the organising committee to run the event later in the year – only by a month or so – to serve as the launch event of the Cape Town Festival.

In Rotary – through the Claremont Rotary Club – the newly constituted WPPPA found a willing and able partner to run the show on behalf of Pedal Power, and make some money for its varied charitable projects across the Western Cape. Already, in year three, the Cycle Tour was moving away from its original focus (directly, anyway) of showcasing the benefits of bikes as transport to a wider audience. As the event grew in numbers and stature that direction became lost, a little, to the grander projects into which Rotary chose to put their time and money. Not that this was a bad thing – the message was still getting out there, and there was considerably more cyclist  awareness than ever before (in the 1970s, Mylrea and  Stegmann tell stories of children laughing at them  in the street, and cars  slowing down to gawk at the novelty of white adults riding bikes).

Mylrea remembers riding his bike to work, and writing a letter to the newspapers about his experiences, lamenting the lack of cycling- friendly infrastructure. He received a phone call a few days later from Peter Haupt, who owned one of the biggest (and arguably most race- orientated) bike shops in the Northern Suburbs, to thank him for his words and offer support. At the time Mylrea owned Soloped Cycles, in Cape Town, so this was an olive branch of sorts – at least the cyclists were supporting each other. The entry system was also still a manual exercise. The 1978 entries were processed at the home of the chairman of the organising committee, Rotarian Dick Jones. Friends and family were press-ganged into stuffing the envelopes that were the race packs the riders collected at the start. The growth in 1979 called for sterner stuff, and Rotary took firmer control of the process, with Steve Laughton making it his PA’s job to process all the entries at his Epping factory – a synergy with Clarion that would last well over a decade, although long-suffering PAs were replaced by larger groups of volunteers as the numbers got bigger.

The ride itself was held in good conditions – slightly windy, but nothing too fierce for a change. The main prize was won by Springbok roadman Hennie Wentzel, who would become a regular podium-stepper in years to come, in a surprisingly pedestrian time of 3:02 – the second slowest in the 39 years the Cycle Tour has been contested. This speaks more about the nature of top-level racing, and less about Hennie’s ability, as the top riders care less about their finishing time, and more about their position. In fine and calm conditions, the race for the win came down to a sprint in Camps Bay, and it was Wentzel who prevailed through a feat of bravery that still sends shivers down Whittaker’s spine. ‘The roads weren’t closed to traffic like today, and as we hit the final straight, just past where the lights are now and with 200m to go, a bus driver decided that the frantically waving traffic cop had no right to tell him to keep going – he had passengers to offload. So he swung to the left and stopped. I and the other riders in the break ducked rightI remember bouncing my shoulder off the traffic cop’s. Hennie saw a gap on the left – the shorter path – between the bus and the pavement. By the time we got past he had two bike lengths on us, and I could only bring one of them back before the line. I still shudder to thing what would have happened if somebody had stepped out of that bus …’

Whittaker finished second, with Jonathan Heard third for the second time in three years. And to think Whittaker almost didn’t ride: ‘I had terrible flu, and I wasn’t going to start, but my brother Nigel had been boasting about his brother the champion, who would be riding the Argus, so I felt I had to. I cramped terribly coming through Hout Bay, mainly because I hadn’t trained for nearly a month, but I had realised by that stage that all I needed to do was hang on up Suikerbossie and I could win again. And then the bus intervened.’ So too did the race officials, disqualifying Stellenbosch rider Rassie Smit, who had escaped the break to win solo but was deemed to have slipstreamed his team vehicle. This was the first, but certainly not the last controversial finale in Camps Bay. François du Toit was the first non-registered rider home, 8th overall in 3:03, leaving the Stegmanns to three-peat in the tandem category. Du Toit would make that his own in the following years.

For Mark Pinder, this was to be a breakthrough year – he was in matric and had joined the City Cycling Club, trained through the school holidays and competed in the club races and time trials. ‘Being with like-minded individuals who could advise and show me the ropes, teach me about cycling equipment adoptions and what to aim for when I could afford it was a blessing. That year, still unregistered but looking more like a cyclist, I rode a 3:09, shaving nearly an hour off the previous year’s time, and I came 38th overall.’

The women’s race was won by Monika Gasson, in 3:59, although the results show one Charlotte van der Merwe as finishing in 3:38, in a group that contained Mr Two Oceans Marathon, Chet Sainsbury, but it would appear she was on a tandem, and therefore didn’t qualify for the category win. Second, in a time of 4:00, was Julia Whittaker.  This was to be Chet’s first of 24 Cycle Tour finishes, to go with his 31 Two Oceans Ultra medals. He would become that race’s director in 1981, a position he held until 2008. ‘I remember that first one well. I had no cycling experience, but I was a regular runner, competing in both the Two Oceans and Comrades marathons. I used my son’s bike, complete with a carrier, a bell and a heavy chain that was wrapped around the seatpost. It never occurred to me to take it off to lessen the load. I had done no cycling training, and I took off with my running shoes, my rugby shorts and a couple of extra pairs of underpants, which I thought would soften my seat. I was seeded in the B group, race number 476. I remember being very strong up Suikerbossie and rang my bell rather cheekily passing  cyclists on fancy bikes in fancy gear, shouting “Ice creams, ice creams”. Some of them were shattered to see this amateur on an old bike go past them. I ended up in position 176. Since then I have ridden another 23, all on running fitness, but with newer bicycles.’

1980 would also be Andrew Wheeldon’s debut tour, ridden on a brand-new Peugeot Super Vitus 981 machine with Mafac brakes, Stronglight cranks, Mavic rims and Zeus gears – bought for the princely sum of R480. His name isn’t on the results list because, as happened back then, he and his cycling buddy Sascha rode ‘unofficially’ as sneaky 14-year-olds. Andrew would go on to more than pay his way at the Cycle Tour, with nearly 40 official finishes to date, 25+ of them in under three hours.

The large groups caused some concern for the race organisers, with more crashes than in previous years as more riders hustled around the peninsula, and plans were already afoot to batch riders into smaller pelotons. Basil Heald remembers well local cartoonist, poet and cycling nut Gus Ferguson’s straight-faced suggestion to the WPPPA committee, on which Heald sat, that the safest way forward would be to stagger it into two starts: Group A leaves on Saturday at 08:00 sharp, followed by Group B at the same time on Sunday. A tongue-in-cheek comment, but a serious consideration a decade and a half later, when the numbers reached the 30 000s, and a different committee had some tricky decisions to make. It never saw the light of day, thankfully, and the unofficial Victoria Road Saturday-before warm-up ride is safe, for now.